Many places in the world are known for their food or sweet dishes. Such as Agra’s petha, Litti Chokha of Bihar, and many more. The food of the place becomes the identity of that place. People start to know that place in the name of work and famous food or famous sweets.

Similarly, Bengal is also known as “The sweetest part of India”. Bengal is very famous for its sweets. Such as Rasgulla, Mishiti-Doi & Sondesh. In Bengal, they are not just sweets but they are emotion. Whether they are happy or sad, they will definitely have sweets to stabilize their mood.

There is one such very famous sweet of Bengal, who not only has the emotions of the people, but also their livelihood. Yes! The name of this sweet is “Langcha Sweet”. Some people called this sweet “Lyangcha” also.

Saktigarh is 80 km from Calcutta. It comes under Burdwan district. Saktigarh is a birthplace of “Lyangcha Indian Sweet Dish“. There is also a very interesting story behind it. A prince of Saktigarh was married to a princess of Krishnanagar.

After marriage, when she became pregnant, she was craving to eat sweets but whatever prince has offered her, she refused to eat. She was looking for the sweet that she had at her father’s house.

The princess did not remember the name of that sweet. All she knew was that sweet was prepared by a handicapped person in Krishnanagar. Yes, but the princess remembered the recipe for that sweet dish. The princess loved the taste of fried cheese that dipped in sugar syrup.

The prince of Saktigarh discovered the handicapped man who made the langcha sweet. Prince called him to Saktigarh. He decided to come and then made “Lyangcha Sweet” with his full heart for the pregnant princess. Since then, langcha has become a famous sweet in Saktigarh.

It is absolutely true that Langcha is considered as the hero of Saktigarh and why not believe in that, when more than half of the population of Saktigarh is running the business of langcha. Due to making and selling Langcha, they get ration to their home and the children are able to go to school.

There are a lot of sweets shops in one place in Saktigarh. They are stretched for 1 km. Shops are both sides of the road. There is a Langcha name added with the name of every shop like Langcha Kothi, Langcha House, Langcha Bhandar, Langcha Niketan, Langcha Mahal, and many more. This place is also known as “Langcha Street” and “Langcha Sweet Street”.

Do you have an idea of how many langchas will be sold in this sweet street of West Bengal in a single day?

You might not even be able to guess, so let me break the ice, up to 1 lakh langcha are sold in a single day at 100 shops of Langcha Street. If you are thinking that langcha will be high-priced sweet, then it is not. You can buy 1 piece of it for just Rs 5 to Rs. 10.

So it is not a threat to your pocket. You can eat and enjoy at any time, without spending much money. Langcha Sweet recipe is not an ordinary recipe. Expertise is required to make this moreish, mouthwatering sweet dish. Everyone cannot make langcha sweet dish. Langcha is not only popular in Bengal but also in Assam, Orissa, and in eastern States. Earlier it was made from Khoya and Chhana but now it uses milk power and atta. The quality of Langcha is not the same as it was earlier.

I did a lot of research about the Langcha recipe. And the ingredients that are involved in making Lyangcha sweet are given below in the list. You should read this article if you cannot go to Saktigarh then you can cook this luscious sweet at your home. 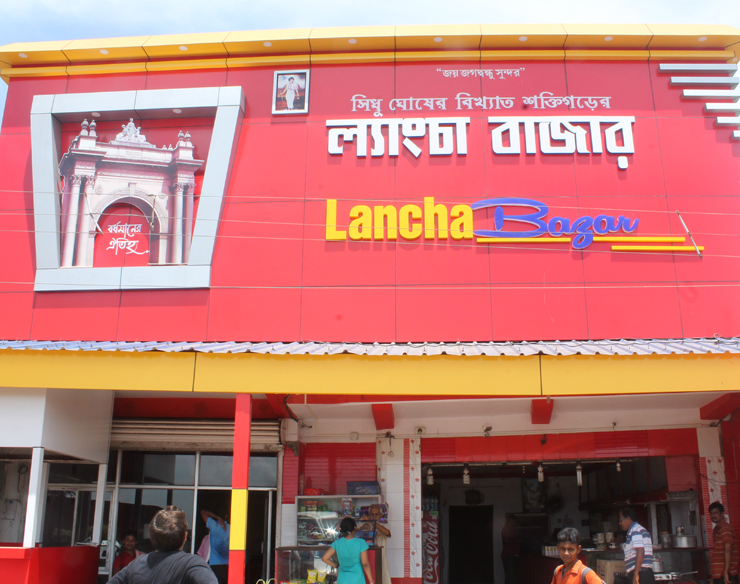 Is it Gulabjamun? Whenever you see the Langcha, it will click in your mind that it is Gulab Jamun, not Langcha. Even though Langcha looks like Gulab Jamun, but when you take a bite of it, you will come to know that this is Langcha sweet not Gulab Jamun.

It is crunchy and brownish from the outside and soft from the inside. In Gulab Jamun, khoya is used only, whereas, in Langcha, cottage cheese (Chana) is used along with khoya. In India recipes of food, sweets are start varying after every 100 Km. This is the beauty of India.

Saktigarh became more famous when a British officer ate Lyangcha sweet and fell in love with Lyangcha. Today, it is also known as Sweet Street – West Bengal because of Lyangcha only. Saktigarha must-stop for people on their way to Burdwan, Durgapur.

If you ever want to visit Calcutta then you should definitely stop at “Langcha Sweet Street” and also taste the sweet, delicious, toothsome Lyangcha.