Everyone loves chocolate. There will be very few people in the world who wouldn’t have dreamed about having a huge chocolate bar to munch on all by themselves. Of course, the size of this “huge” chocolate bar differs from one imagination to the other. But someone’s imagination and determination to make the world’s largest chocolate nut bar outshone everyone else’s. That, someone, was Reese’s.

They took the record of making the world’s largest chocolate nut bar from Snickers just a few weeks after Snickers registered themselves as winners. Reese’s was able to do this by creating a larger than life replica of Reese’s Take 5 chocolate bar.

Reese’s pulled up their socks and got into the action after seeing Snickers record. Someone in their team decided to make an even bigger bar together in under two weeks. The humongous Take 5 bar was revealed at Hershey’s Chocolate World in Hershey, PA, USA. It mirrors the classic bar in every way possible, right down to the ingredients. You will find chocolate, caramel, peanut butter, pretzels, and peanut layers in the giant-sized version too.

The previous record held by Snickers

The previous record was held by Snickers who made a 2 feet high and 26 inches wide chocolate nut bar which weighed in at more than 4,700 pounds. As such the Guinness Book of World Records declared Waco, Texas, as the home to the world’s largest chocolate nut bar. Another interesting tidbit about the giant bar was that it was the size of 43,000 single-size candy bars put together. 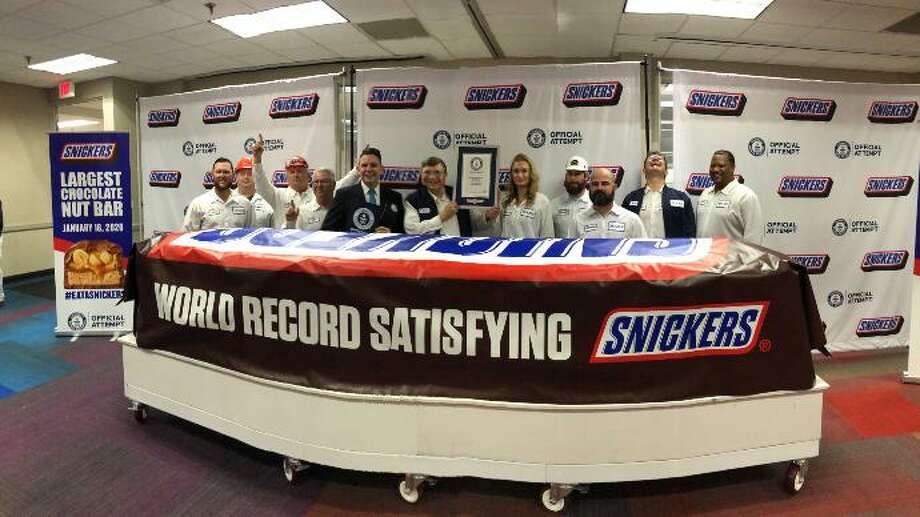 Making a giant-sized Take 5 wasn’t easy for Reese’s. But they did it and that too without compromising on any of the ingredients which are there in a standard-sized bar. This means that they added caramel, pretzels, and peanut butter to the giant version of the bar too.

Reese took just five days to make the final product. It measures 9 feet long by 5.5 feet wide by 2 feet high. Ultimately they broke the record by a staggering 1,215 pounds, bringing the final total to be 5,943 pounds.

Why did Reese’s attempt this Guinness World Record?

Reese went through this much planning and execution troubles just so that they could make a huge splash in their advertising spot for Sunday’s big game. Actually both Reese’s and Snickers created their giant bars to build hype for their Super Bowl commercials. Reese’s thought that the only way to grab attention was to go straight for the headlines. They did this by going big, as big as they could.

This achievement for making the Guinness World Records for the largest chocolate nut bar actually comes just ahead of Reese’s first-ever Big Game advertising spot. Their advertising aired during the third quarter of the game this Sunday, February 2.

Of course, this record might seem a little too hastily done but Veronica Villasenor, Vice President of Chocolate thinks differently. She said:
“The Reese’s team believes records, even those just a few weeks old, are meant to be broken. You might not have been familiar with Reese’s Take 5 before, but now, the bar will become your newest obsession.”

The creation of the Take 5 chocolate bar 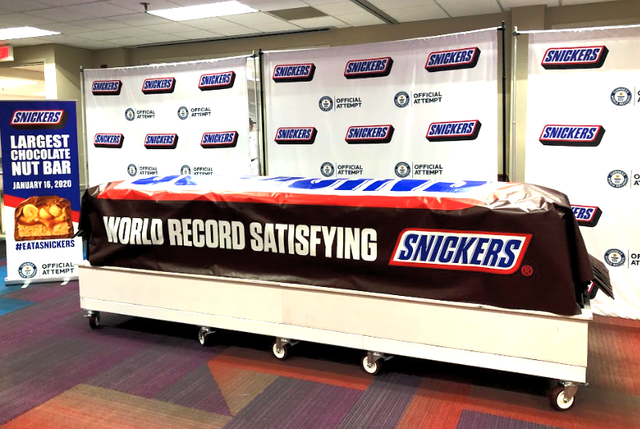 Michael Nolt, Chocolate Fellow, and member of the R&D team at The Hershey Company is the original creator of Taking 5 and launched it in December 2004. Nolt was there to see the evolution of the candy from the initial concept right down to its record-setting achievement.

Making this huge Take 5 took a considerable effort. A team of more than 40 individuals from The Hershey Company research and development center and manufacturing facilities helped Nolt in the bar’s creation.

What will happen to this giant chocolate bar?

What will become of this huge chocolate bar? This is a very common question among readers. But be rest assured that the chocolate bar will not go to waste. It will be distributed among Hershey’s employees as a success treat as per the Guinness World Records guidelines. These guidelines state that all food-related records must be either donated or consumed.

Not everyone can have their cake and eat it too, but Reese’s certainly did. They made their Record smashing giant chocolate bar, got that premium advertising they wanted, and divided their stunning creation amongst themselves as well. They certainly showed that chocolate dreams no matter how big it can certainly come true.