The toilet paper rolls were stacked Monday, Jan. 6, into a 16-foot pyramid inside Midland County’s Bullock Creek High School by a school robotics team hoping to set a world record and raise money for the team in the process.

Inside Bullock Creek High School, you’ll find plenty of rolls of toilet paper, not in the bathrooms, but in the school’s atrium.

More than 27,000 toilet paper rolls make up a pyramid.

With a team budget of $60,000, the 25-member team just entered their six-week build season. Receiving the competition challenge on Jan. 4, 2020, the team must construct a robot that can shoot a ball into a goal six feet off the ground. But before the team could tackle that challenge, they would spend hours on Dec. 30 and 31 constructing an ode to Egypt that no ancient civilization could have ever predicted.

Constructed in the high school’s atrium, the team used the help of local construction services to build scaffolding that ensured a safe building period. Instead of paying for a member of the Guinness World Record team to come out and inspect the pyramid, the team is doing the data themselves, with architects measuring its dimensions.

The robotics team is in the process of breaking the Guinness World Record for the tallest toilet paper pyramid.

The GUINNESS WORLD RECORD for the tallest toilet roll pyramid is 4.36 m (14 ft 3.75 in), achieved by Kimberly-Clark Corporation and Meijer (both USA) in Appleton, Wisconsin, USA, on 24 May 2018.

GUINNESS WORLD RECORDS also recognized the world record for the largest roll of toilet paper; it was 2.97 m (9 ft 8.9 in) in diameter and was created by Charmin (Procter & Gamble) in Cincinnati, Ohio, the USA on 26 August 2011.

Bullock Creek senior Maxton Herst, who came up with the idea, knows exactly how many rolls are in the huge structure: 27,434.

“The bottom three layers—that’s approximately how much toilet paper the average person uses in a lifetime,” he calculates.

The pyramid, that Herst and the rest of the 20-person robotics team started building on Dec. 30 last year, it took 16 hours to complete.

“There was a lot of enthusiasm when we got to the last few layers, but the final roll at the top was actually pretty anti-climactic,” Herst said.

“Every single roll you place, you want it to be in the right spot. It was simply kind of mind-numbing work.” he further said.

“We have a pre-defined height which is 16 feet 3 inches and 5/8ths of an inch,” said Herst, senior.
“That’s almost 2 feet over what the current world record is,” he said.

The idea came from Maxton and it’s been four years in the making.

The idea for the pyramid came to Herst more or less by accident. He had left YouTube on auto-play on his home computer one day and when he came back to it, he was watching a video about the current world-record-holding toilet paper pyramid.

“I showed it to my dad and he said, ‘You know, your godfather runs a paper products company,’” he said.

At the time, Herst was a freshman. He brought up the idea of breaking the record to his then teammates, none of whom took it seriously. 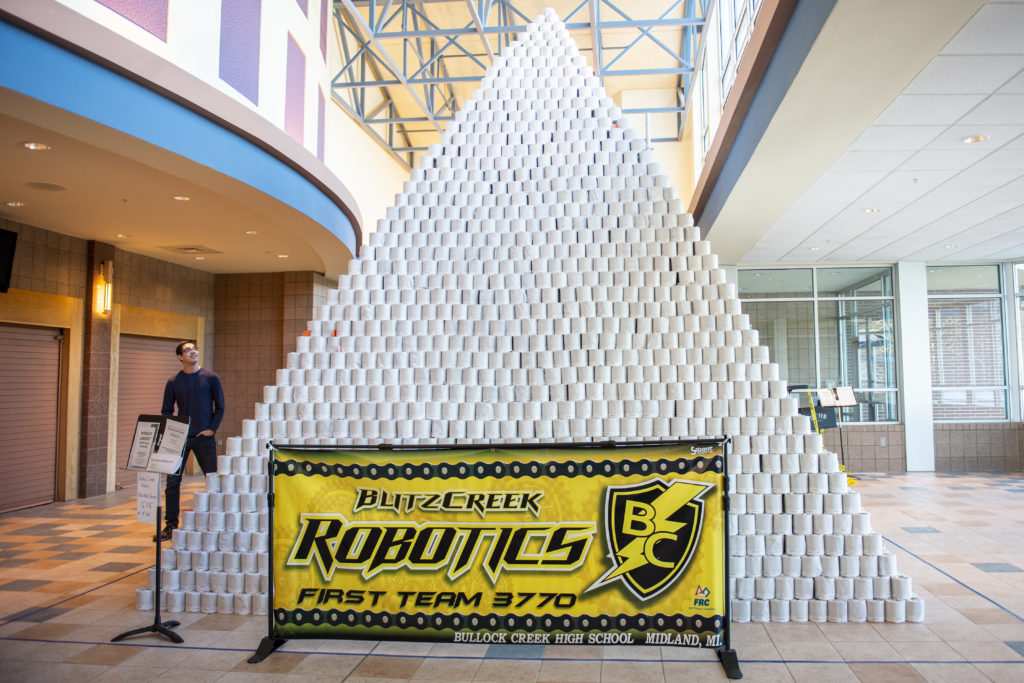 Three years later, Herst, now a robotics team captain, followed through. The team initially bought the toilet paper from paper products company Veritiv. They now plan to sell boxes of it to recoup their money and raise funds for the team.

Mentor Jamie Forbes said over this feat, the BlitzCreek 3770 Robotics team comes up with a set of skills applicable to students’ futures.

“Robotics is really a cool program in the sense that it gives students not only the engineering background but also their ability to put their hands and ideas into action,” Forbes said.

“Interpersonal skills and communication skills certainly have been a big one for me,” Maxton said.
“So we are going to deconstruct the pyramid and we are selling the toilet paper as a fundraiser for our team,” Maxton said.

The robotics team said fundraising plays an important role in their efforts.

They also are waiting for the Guinness Book of World Records to review the pyramid’s documentation and officially recognize it as the new world record-holder.

“If anybody could pull it off, it’s him,” said club mentor Tim Klingler.

Herst and the rest of the team began to dismantle the pyramid on Monday. The individually-wrapped rolls of Reliable brand, two-ply toilet paper are being placed into 96-count boxes for purchase or for donation.

The proceeds will help fund the team as it gears up for its 10th season of competition. All interested can contact the Bullock High robotics team and if you’d like to purchase toilet paper from them, you can email them at blitzcreek3770@gmail.com or on its Facebook page.