After the ban of 59 Chinese apps in India, India has now started to walk on the path of self-sufficiency. After Tiktok Ban, Indian startups and well known IT companies have bombarded the audience with TikTok’s alternatives or other apps alternative.

Vice President of India “Venkaiah Naidu” has launched the Made in India social media app on 5 July. The name of this app is “Elyments”.

Elyments App is available in 8 regional languages. This app has been developing by keeping in mind the Indian audience in mind. This app has just been launched and already has 1 + million downloads that have already been on Google Play Store.

Check the Top Similar app as TikTok made in India

But many people still don’t know so much about it. If you want to know about this super Indian social media app, then you will have to read this complete article because I’m going to tell you the feature along with the reviews. So let’s start with it.

This app developed by Sri Sri Ravishankar’s volunteers ( who are a part of the art of living) along with Sumeru Software Solutions Pvt Ltd.

At the time of launching, Mr. Venkaiah Naidu said: “I am happy to note that more than one thousand IT professionals, who are also the volunteers of the Art of Living, have together created an indigenous app named Elyments. It’s appreciable that the app will be available in eight Indian languages,” 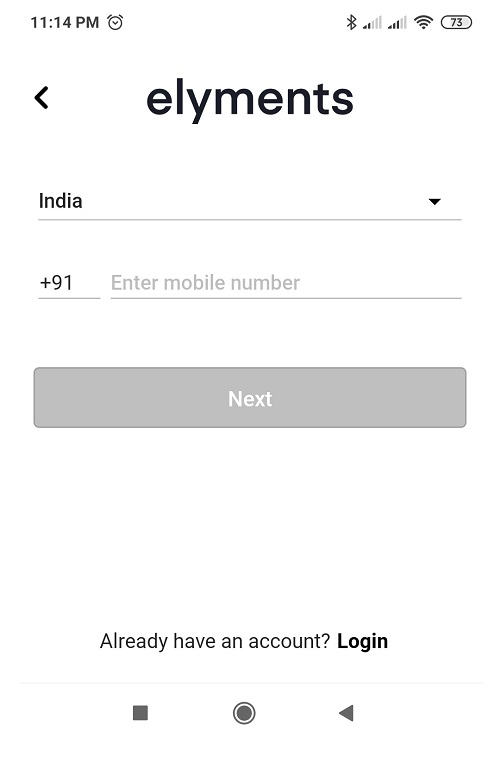 Makers of Elyments app made it very easy to signup in the app. The person only have to select his country then enter his mobile number and proceed. Oh, is that so! Now you are thinking that the Indian app is for Indian people, so why do I need to select the country.

Then let clear the air, this app can be downloaded worldwide. Isn’t a good thing? By the way, in India, you do not need to select the country, India is automatically there. But for other countries people, need to select their country first.

After this you will get an OTP, fill it and click on confirm, now you are logged into the app. In Manage My Elyments handle by going to Settings, you can update your profile, account name, personal information like gender. After this, you became the official Elyments app user. Congratulation!

My experience was the pathetic first time; it took a lot of time to get OTP.

And I wasn’t able to sign up in the app. But they are improving their app on a daily basis.

Today I downloaded Elyments app again and get signed up in less than 3 minutes.

Elyments Hub is a fabulous feature in the Elyments app and I like it most. Many categories have been made in Elyments Hub like news, health and lifestyle, Bollywood, shopping, fashion, games, and many more.

You can browse as per your interested area. For example, you wanted to explore the shopping website you can browse it directly from the app.

Elyments Hub feature goes absolutely well with their tagline: “Elyments Hub, where Netizens come to chill”. This is the best area to explore news, entertainment, games, and many more.

Next, we move to Social: Mainly you get three features here: search, feed & discover.

you can search for people with their names. This is a common but important feature to reach other people on the app.

Similar to Facebook and Instagram, Elyments have a basic feature called a feed. You can scroll down and check the posts of many people on the app like your friends or other celebrities.

You can also create your own post where you can upload pictures as well as videos from your phone. You can also click an instant picture and use a few filters. In the same way you can record a video too. But sad thing is that you cannot use any filter here. You can just save the video if you want.

You cannot even upload multiple pictures as we do on Instagram. Yeah! It is quite upsetting but hoping to improve these features in the coming days.
Another cool feature of this India social media app is the real-time chat option.

User can instantly contact their friends across the world over a free video call, free voice call, or simple messages. Isn’t it cool?

The setting options provide you different kinds of settings like privacy, notification, account, or chat media setting. Let me tell you one thing the main concern of this app is privacy and data security. No data will be shared with the third party without the user’s consent.

From privacy setting, you can set the privacy on your profile, friends view and on other personal details if you don’t want to make the public

Almost 1000 IT professional spent their day and night to develop this super app in India. It is a completely homegrown app.

How User reacted to the elements app?

Elyments app got a crazy response from the audience. 100k Indian audience download Elyments app within 6 hours of its launch. Can you believe that? And I’m just telling you the android app download number. It feels like they were waiting for it for so long. Now, it has approximately 46k reviews and 1+ million downloads on the play store.

Elyments app rating was 4.5 on play store earlier and 4.4 apple store. But now, the app rating has been dropped down to 3.4. Because there are so many technical glitches in the app that needs to resolve by Elyments app developers.

We all should support PM Narendra Modi “Atmanirbhar Bharat” campaign. We should also take one step forward and welcome our own “Made in India” Products.