Madhya Pradesh is a central state in India. It is also known as the heart of India. Madhya Pradesh is the land of various cultures and traditions. It is considered to be among the most beautiful and varied state of India , this place has been grandeur era of Malava, Dasani, Maurya, Chandra dynasties.

It is the home to people of all origin and ethnicities. During a trip to Madhya Pradesh, one must visit the famous temples that are considered to be pious and sacred places of devotion by the devotees. There are many temples that are dedicated to Lord Shiva, Vishnu their avatars and Goddess Lakshmi. The list of must-visit temples is as follows:

The Kandariya Mahadeva Temple is one of the biggest Western group of temples and is also the most decorated Hindu temple of medieval temple group found at Khajuraho in Madhya Pradesh, India. Lord Shiva is the main God deified in the sculpture of the temple. It is one of temples preserved from the medieval period.

Khajuraho was once the religious capital of the Chandela Rajputs and today is one of the most popular tourist destinations in India. The Kandariya Mahadeva temple was built in around 1050 i.e. 1000 BC by Vidyadhara, one of the greatest Chandela kings.

The main shikhara rises 31 m to portray Mount Kailash, the Himalayan mountain place of Shiva and is surrounded by 84 Urushringas. Inside the sanctum is a marble linga signifying Lord Shiva. It is protected by Archaeological Survey of India which is part of the UNESCO World Heritage site.

The Lakshmana Temple is built by Yashovarman located in the Western Temple complex in Khajuraho, Madhya Pradesh, India. The temple is dedicated to Lord Vishnu. The entire complex stands on a high podium. The temple has ardh-mandapa, Mandapa, Maha-Mandapa, Garbhagriha and Antarala.

The Lintel portrays goddess Lakshmi in the center and edged by Lord Brahma and Vishnu. The shrine comprises four-armed and tri- headed (the central head is of human and two sides of boar and lion depicting Varaha and Narshima) sculpture of Vaikuntha Vishnu. 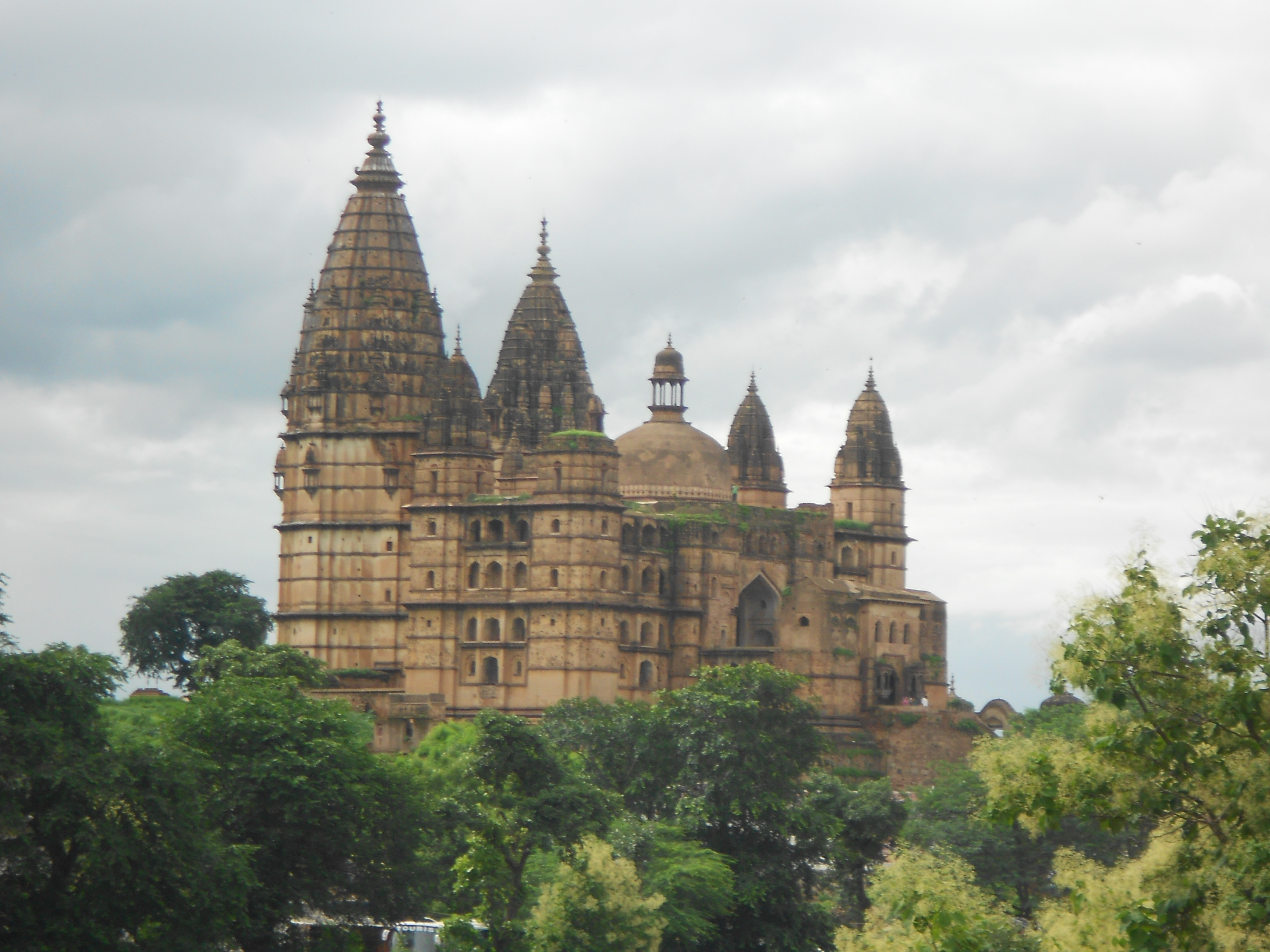 Chaturbhuj Temple is dedicated to Lord Vishnu and is situated at Orchha, Madhya Pradesh, India. Chaturbhuj means one who has four arms. The temple has a multi-storied complex. The structural view of a temple is a combination of temple, palace and fort architectural features, richly summed up with religious and secular flairs.

The image of Radha and Krishna is esteemed in the temple. The temple has tall pinnacles in the form of pine cones. built atop a high platform of 4.5 metres (15 ft) height. The height of the temple is 344 ft with a platform of 15 ft. The temple has a very impressive view with a very large entrance, arcaded openings, a large central tower and covered with beautiful marble work. The entrance involves about 1 metre (3 ft 3 in) high climbing steep and narrow steps numbering 67, forming a winding stairway.

The interior has many cells or mandapas and the main hall or mandapa of the temple is built in Islamic style. It is in the shape of a cross and it is at right angles to the lobby of identical layout on each side. The temple’s exterior is richly decorated with lotus symbols. The ceiling of the central dome is flooded with lotus.

The Javari Temple is a Hindu temple, situated in the vicinity of Khajuraho. It was built somewhere in between 975 to 1100 AD. It i a temple of Lord Vishnu and the idol of the temple is broken and is without a head. The temple is a World Heritage Site, located in the eastern area of Khajuraho. It is nearby Vamana Temple, which is at a distance of about 200 meters from it.

The temple is a piece of art of architecture, with a portico, vestibule, mandapa and sanctum, but without a passage between the outer and the inner walls of the garbhagruha. It has remable Makara Torana (Capricorn Arch) and shikhara. The outer wall has three bands of carved sculptures wall. The temple is almost identical with Chaturbhuja Temple.

Vamana temple is a Hindu temple named after Vamana, an avatar of the Lord Vishnu. The temple was built around 1050-75. It is a World Heritage Site located in the eastern area of Khajuraho, Madhya Pradesh, India.

It is situated about 200 meters to the north-east to Brahma Temple.It has an entrance porch, vestibule, sanctum and maha-mandapa, with lateral transepts.

Varaha Temple is named after Boar, an avatar to defeat Hiranyaksha, who carried Earth to the bottom of the cosmic ocean as mentioned in Purana. The battle between them lasted for a thousand years and after conquering Hiranyaksha, Varaha carried out and restored the Earth it to its place in the universe.

Thereafter, Vishnu married Prithvi in this avatar. .The shrine of Varaha Temple is built on a lofty platform and is very simple and modest. It is completely built with sandstone and has an oblong dome with a pyramidal ridge of retreating tiers, relaxing on fourteen plain pillars.

There is also a 2.6 m long and 1.7 m high statue of Varaha which is enormous and colossal and made up of sandstone with numerous figures carved on its body. 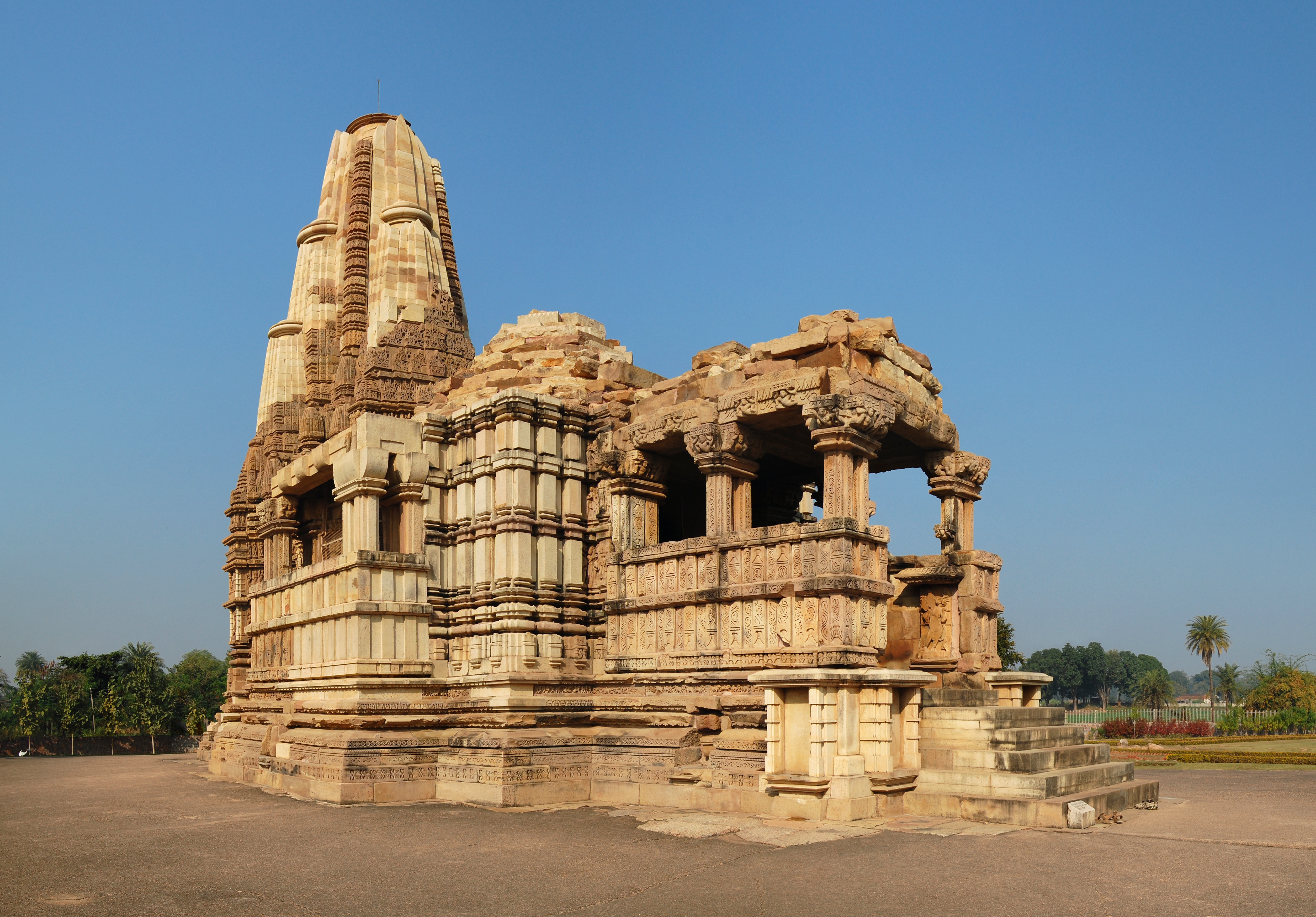 The Duladeo Temple is situated in Khajuraho, Madhya Pradesh, India and it is dedicated to the Lord Shiva ‘Dulodeo’ means “Holy Bridegroom”. It is the last build temple during the Chandela period. The figures carved in the temple have soft communicative features, unlike other temples.

The temple consists a sanctum without a vestibule, main hall, ambulatory and an entrance porch. The temple pinnacle is formed in three rows of minor shikharas. The central hall in the temple is huge and octagonal in shape.the ceiling has twenty brackets gracefully carved with heavenly dancers.

The top rows in the front have sculptures of vidyadhara in a lively mode. The carving of a flying god which is decorated with a long rectangular shaped necklace is also a beautiful piece of art.

The Matangeshwar Temple was built in the ninth century by Chandra dynasty at Khajuraho, Madhya Pradesh, India. The temple is dedicated to Lord Shiva. Lord Shiva is also known as sage Matang and before which the name of the Shiva Lingam was called as Matangeswarar. This Matangeshwar Temple Khajuraho one of the oldest temples in India and it is one of the most religious pilgrimage destinations for people visiting Khajuraho.

Lakshmi temple is dedicated to Goddess Lakshmi and Lord Vishnu and it is situated in Khajuraho, Madhya Pradesh, India. The temple structure rests on square shaped chabutara. It has a small sanctum. The back and side walls do not have any figures carved on it.

The Essential Packing List For Your Trip To India