War certainly takes lives. Many say that ultimately no one wins in a war. For the soldiers who are on the battlefield actively fighting against the opposition, there is no victory. Just death or if not death then disability and trauma.

A stark example of this was set in the two world wars. The wars saw thousands of deaths and ravaged families as a result. But nobody ever forgot the fallen.

The people who are spared by the war and the survivors of the war do try to band together to create something that will honor the memories of those who fought for a cause and laid down their lives for it.

One such example of such a structure lies in Romania. It’s called the Mausoleum of Mărășești.

This mausoleum is located in Mărășești, Vrancea County, Romania. This memorial site is dedicated to the commemoration of the Battle of Mărășești and the Romanian Army members who were killed during World War I.

The memorial contains the remains of 5,073 Romanian soldiers and officers killed in the First World War. As such it actually sets the world record for being the Largest World War One Mausoleum, according to the World Record Academy.

But the Mausoleum of Mărășești isn’t the only one which was erected to honor the dead in the area. In the same Vrancea county, there are actually three other smaller similar mausoleums dedicated to the first world war and the lives it took.

The Battle of Mărășești was fought from August 6 to September 8, 1917 between Germany and Romania in World War I. The Romanian campaign was part of the Eastern Front of World War I. Romania and Russia had allied with France and Britain against the Central Powers of Austria-Hungary, Germany, Bulgaria, and the Ottoman Empire.

Beginning from August 6, 1917, this area saw the battle of Mărășești which was the largest battle ever fought by the Romanian Army. It was fought for 29 days and it was a continuous battle with attacks and counter-attacks.

There were more than 60 strong attacks by the German army. At the end there were massive losses and the dead/missing figures ranged for 24,000 to 27,000 for the Romanian side. The German side would have to deal with even more deaths as their dead or missing count had risen to 45,000.

Mircea Balica, the guardian of the Mausoleum said that:
“In the historical annals, the Battle of Mărășești is called “The Romanian’s Verdun” as a duration, importance and loss was a small Verdun.”

The motto of the Romanian Army during the battle was “Pe aici nu se trece”. The English translation is “They shall not pass” and was probably inspired from the famous slogan of General Nivelle during the Battle of Verdun. If this story gave you goosebumps then know that there’s more heroism yet to come.

A young soldier of the battle

War takes the young and this one was no exception. Mărăşeşti lost one of their youngest in this battle. Dr. Florinel Agafiţei, history teacher in Focsani said that:
“Here was buried, with great honors, in the largest mausoleum in the world dedicated to the heroes of World War I, the heroine of the Romanian people Mariuca Zaharia, a 12-year-old girl who fell heroically in the battles in Mărăşeşti.”

This Mausoleum was built by the people 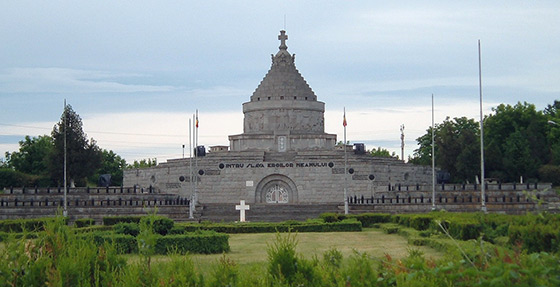 This significant memorial was built by architects George Cristinel and Constantin Pomponiu. It took them 15 years to build and was unveiled on 18 September 1938 by King Carol II.

This mausoleum wasn’t built as a result of any government initiative or such. It was made from donations. Subscription lists were made and people who had money donated to it.

Those who didn’t, came and helped with the work of erecting this monument. The land on which the mausoleum stands was donated along with an important sum of money by George Ulise Negropontes. He was an descendent of a Greek noble family and became the Mayor of Marasesti after the First World War.

The daughter of Ulysses Negropontes, Elena, was the wife of General Eremia Grigorescu, who fought valiantly and made history in the battles in Marasesti. From their marriage resulted a son who would bear the name of his grandfather, Ulysses. Ulysses was decorated by the French state with the highest distinction, the “Legion of Honor”.

The Romanian newspaper ‘Adevarul’ reports that:
“Important personalities of the world belong to the Negropontes family. John Negropontes was the former head of the Central Intelligence Service of the United States of America (CIA), considered the right hand of former US President George Bush. John Negropontes was also US ambassador to Iraq.”

Mărăşeşti is a little place and this little place saw unprecedented levels of destruction. The people living here lost loved ones by the thousands. But they decided to commemorate such a grievous day by erecting something which will remember not the war but the heroes who fell in it.